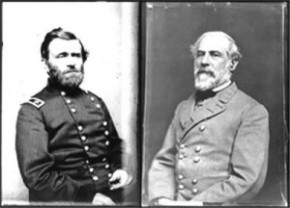 It is eerie how certain periods of dates seem to surface in historical significance.  This is the case for the 48 hour period July 3-4, 1863 – 150 years ago this last week.  It is odd how the forces of nature seem to center on certain dates.

The Battle of Gettysburg reached its climax on July 3, culminating in the “high-water mark of the Confederacy.”  To debate the significance of the battle is pointless and futile – as it was a critical juncture of Robert E. Lee’s Army of Northern Virginia.  The less-informed will say that Confederacy was forced into a series of long retreats after this battle.  That isn’t entirely true.  The Bristoe and Mine Run campaigns that fall demonstrated the Lee, much like George Meade, struggled to engage each other in another decisive battle but failed to do so.  Others say that the Army of Northern Virginia never again invaded the north – but that disregards General Early’s invasion of Maryland in July of 1864, the Battle of Monocacy, and eventual attack on Washington City.  That being said, the loss at Gettysburg ate into one resource the South could not replace – men.

But of equal importance was the July 4, 1863 end of the siege of Vicksburg Mississippi.  General Ulysses S. Grant’s victory over this stubborn city gave the Union unfretted control of the Mississippi River.

Gettysburg seems to always draw the spotlight to the casual history buffs.  Some of this comes from the personalities involved.  It is hard to disregard the rock-star quality of Robert E. Lee.  There was the valiant defense of Little Round Top by the 20th Maine.  And Pickett’s Charge is burned in the public psyche as the image that culminates the battle.

Vicksburg was a siege.  While there were assaults by the Union army which tightened the noose around the city, what brought down Vicksburg was modern siege tactics.  It was not as much the bombardment of Vicksburg as the lack of food which forced the capitulation of the city.  Compared to the images of Pickett’s Charge, starvation seems sad and depressing.

Confederate General Pemberton was not a colorful or dynamic leader as Robert E. Lee was.  General Grant himself was far from the status of General Lee at this stage of the war.  While he had distinguished himself several times in the west, the majority of the population of the nations were more focused on the events in the east.

Vicksburg, however, marked a strategic victory.  Securing the entire length of the Mississippi River, the superhighway of the era, effectively cut the Confederacy in half.  It achieved far more than the victory of Gettysburg, though I’m sure others will retort this with me.  Moreover it secured General Grant as the man that would be elevated to position to deal with General Lee and the Army of Northern Virginia.  And this collision of Generals all was determined in a 48 hour period of 1863.