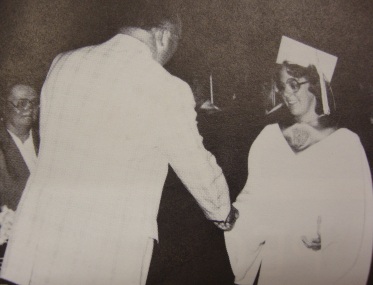 The subject of our book, Maggie Hume, graduating in High School

I haven’t written any updates for a while on my latest true crime project – mostly because we’ve been busy writing it and I wanted to make sure that a few people reviewed it for accuracy (including a member of the victim’s family.)  We’re finally in a position to give an update.

My daughter and I have finished our upcoming true crime book – Unsolved Battle Creek – The Murder of Maggie Hume.   Few people know what it is like to finish a book.  You have a huge sense of accomplishment, a tinge of relief, a sigh of personal satisfaction; and in the case of this book, the knowledge that it is not really done.  The book won’t be complete until someone is brought to justice for this crime.

When you write true crime projects about unsolved cold cases there is that reality that you must confront.  But the book is just a vehicle for telling the story, getting people to talk, and hopefully generating new tips and leads that can bring the case to closure.  Is that possible?  Yes. We both sincerely believe that can happen. And there are a lot of reasons we feel that way, which readers will get to read for themselves in the book.

When we started this project, I thought it was going to be fairly straightforward (despite warnings from people who knew the case.)  Because of our FOIA (Freedom of Information Act) request I knew (from experience) we would have access to information that the public never did.  We were sure there were suspects and that the police were closer to solving the case than the public ever realized.

We were unprepared for the incredible journey this book took us on.

When you work a project like this, you have to go where your research takes you.  The book we ended up writing certainly wasn’t the book we thought it would be those months ago when we started.  When  we started this, I assumed it would follow the usual flow for a true crime book: You start with the crime itself, you go through the investigatory process, you narrow the suspects (and in other true crimes about closed cases, you cover the trial and conviction).  This book proved to be different and more challenging from the beginning.

First off there were more potential crimes involved including two other murders and a tragic/fatal auto accident and the cover-up tied to it.  Michael Ronning’s confession(s) and the mountain of legal rulings tied to him were sometimes daunting to process.  The rift between the Prosecutor’s Office and the Battle Creek Police Department about this case was like an open wound for some people, even after all of these years.  Our asking questions only seemed to inflame that old wound.  As much as we wanted to disregard some of these things we uncovered, it proved quite impossible.  All we, as writers, wanted to do was to tell the story.  This one has more twists and turns linked to it than a movie on the Lifetime Channel.

There were times it was confusing for us – so we had to be careful in the telling to make sure we made it so a reader could keep it straight.  We were lucky to have people to help guide us, officially and sometimes off-the-record. A number of former officers and prosecutors came forward to assist and clarify the mountains of information we had.

Along the way on this journey we’ve met with some incredible people.  What stood out for me personally was how almost everyone who had touched this case was still focused on getting to a conviction.  Police officers and Prosecutors are that way.  Cold cases tear at them.  They want justice.  Nobody wants “the bad guy” to get away with murder.  There were different opinions as to who the bad guy was – but that was okay.  We tried to keep some degree of objectivity when we wrote the story, though in some cases we deliberately didn’t.  The readers need to understand the full story and sometimes that requires the writers to make the connections to help them.

One of the biggest challenges we faced was word count.  To be blunt, we exceeded it, and there was plenty that we wanted to include, but we couldn’t because of space.  It’s an envious position to be in as authors, but also painful to contemplate cutting sentences or entire paragraphs. This book will have a lot of photographs as well.  Pictures take you on the journey we travelled as writers.  We have to put the reader back in 1982 and we’ve got a lot of ways we did that.

I believe that there will be people that are happy with what we have written in the end.  I also believe that there are going to be some people that are not happy with what we have penned.  Two people in particular (the suspects) are not going to be pleased at all.  A few others will I’m sure try and pick it apart as well.  We welcome the dialogue.

One thing we can all agree on is that, at some point, justice must be served.

People have been asking me what it is like writing with my daughter – and it has been a rare treat.  Usually when I work on a project like this, I don’t have someone to act as a sounding board.  Victoria was fantastic, tackling some of the most complicated and difficult chapters to write.  The book was a true joint venture in every way.  We were constantly bouncing ideas off of each other – running text past each other, tweaking things.  We physically (during that horrible blizzard in January this year) retraced the night of the crime, right down to visiting the Urbandale Ritzee, which is like a snapshot into 1982.  Personally, I think it helped make this product better overall.  It certainly was therapeutic for me to work with her.   This book impacts a lot of people’s lives and such emotional writing can take a toll on you as an author.  She weathered it well.  Victoria can be a pit-bull on speed when she gets her blood up and this book inflames that kind of excitement at times.

It was a little odd, teaching my daughter what it was like in Battle Creek in 1982.  There were so many things happening that impacted the community – from wacky antics of the Guy Brothers to the failure of the Michigan Mall. At the same time it was a little weird to see some of the seedier side of my hometown, Battle Creek, in this book.  There’s a criminal element of society that most of us never get exposed to.  When that culture touches ours, the results are almost always bad.

There are a lot of people we have to thank for this book – and I hope we’ve captured all of their names in the acknowledgements.  The History Press, our publisher, has been great (as usual) to work with.

We don’t have a release date yet.  And for those of you asking, yes, we will be doing a Michigan book tour after the book has been out for a few weeks.  Now we enter the stage where the copy editor does her magic and we wait to see what the final product looks like.