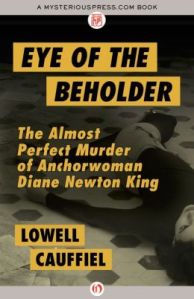 I read this book a few years back in paperback but it is now available in Kindle format so I thought I’d re-read it and I’m glad I did.  As a fellow author who writes about crimes in Calhoun County Michigan, Lowell Cauffiel has done an admirable job at writing about the murder of local ABC reporter Diane King.

I remember this crime only peripherally – because it comes up from time-to-time when doing my own local research into crimes.  When it happened we had already moved from Michigan but my mom told me the nuts and bolts of what the rumor mill was around the case.  At the time it was a very high profile case because Court TV, a new channel, was covering the trial (eventually).  Diane Newton King was a local news anchor on Channel 41 locally in Battle Creek MI.  She was shot dead in her driveway on February 9, 1991 while her two children were in her car.  The public strongly believed that she was being stalked by a crazed fan at the time (something she had gone to the police over after receiving a letter of cut out letters warning her.)  Her husband, Brad King, was a former police officer and part-time criminal justice instructor at Western Michigan University.  Dianne was a big fish in a little pond, and as such was well known and popular in the region.  The senseless brutality of her murder stunned the community.

The Calhoun County Sheriff’s Department rather quickly realized there were flaws in her husband’s accounts of the murder, his whereabouts, and actions after the crime.  Mistakes were made in the investigation – as they often are.  I know people are often fast to lay the blame with bad investigators but this was an atypical crime for this department – more of an assassination than a straight-up murder.  Brad King comes across as exceedingly arrogant, someone that was playing a game with the investigators.  As they dug deeper into the crime, they began to find evidence of Brad’s extramarital affairs and the lies he spread about his wife and their relationship.

This is one of those cases that is interesting to read about because the motive never really emerges, though Cauffiel does a good job at getting to it.  Brad’s motive, if it existed, is mixed with contradictions and in some respects makes no sense.  His wife was his gravy train, allowing him to work part-time and essentially run around on her.  Only her threat to reduce her work and stay at home put his life of sloth at risk.  I found myself wondering why he would rock that proverbial boat.  Motive isn’t necessary to prove in a trial, but it sure helps any jury understand why a crime happened.  This put a huge burden on the back of the investigators and prosecutors.

The author does a fair job at explaining where the Sheriff’s department struggled with the investigation and the strained relations they had with the Prosecutor’s Office.  I thought she did a good job of describing Marshall Michigan’s culture, but could have done more here with the history of the community.   This is more of a book for a mass market rather than one that tailors to the local readership, but I still think a little more history would have added some depth here.

The sections of the book penned by Brad King himself were disturbing to read when you realize that he was the suspect of the crime.  His perspectives of the investigations bothered me.  I’m never in favor of giving murderers a forum to vent their position.  I’ve had to block my own blog from some murder suspects or their friends from attempting to expound their innocence.  At the same time, I couldn’t stop reading these sections. I think as a writer, I would have included them because they are compelling.

My favorite part was the trial. I really enjoyed the strategy of tangling with Brad King in court and the vigorous defense he had.  It’s a dangerous chess match with lots of twists and turns along the way.  I won’t ruin the book’s ending for you – you’ll have to read that yourself.

For me, as a writer of Calhoun County history and true crime – I enjoyed the book.  First, the crime took place at Frank Zinn’s farmhouse – and I wrote about Frank’s brother, Fred Zinn, in my book, Lost Eagles.  In my book, Murder in Battle Creek: The Mysterious Death of Daisy Zick, I interviewed Gary Hough who leads the task force on the King murder. He’s a neat guy to talk to about criminal investigations and taught me a lot about profiling and investigatory techniques.  The descriptions of Marshall mirrored my own impressions in my book, Secret Witness.  Jon Sahli, Gary Woods, and Nancy Mullett are discussed as part of the prosecutorial team working the King case – and two of the three of them helped contribute to my book, The Murder of Maggie Hume.  I found the tension between the prosecutors and law enforcement in the King case eerily reminiscent as the issues in the Hume murder.

I have had people tell me they didn’t enjoy this book but I found the author’s style good.  The end of the book, where the shift is made to first person, is a little jarring, but otherwise this is a good solid true crime read.  I give it four-and-a-half out of five stars – definitely worth picking up now that it’s out in Kindle format.

7 thoughts on “Review – Eye of the Beholder: The Almost Perfect Murder of Anchorwoman Diane Newton King”