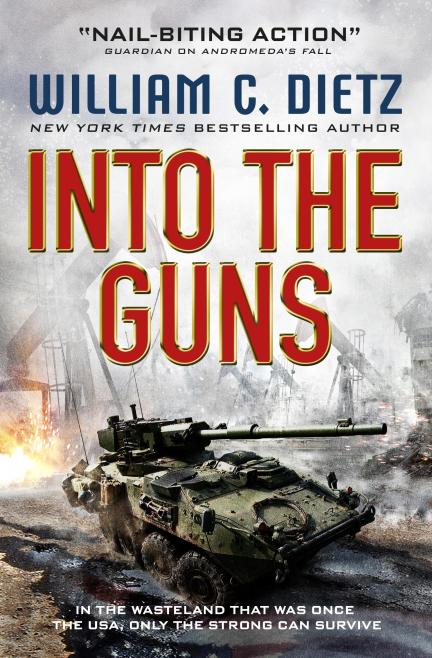 I am a sucker for novels that deal with the end of the United States and how that would be horrible.  I was in for the John Birmingham’s After America series, though I found myself wanting.  He did a great job of character creation and all – but I struggled with it near the end.

So when I spotted Into the Guns by William C. Dietz, I jumped at it.  Perhaps now I would get some of that satisfaction I felt missing.  I came away liking the book, but felt I was still missing something.

The premise is simple.  In 2018 a meteor shower destroys Washington DC.  War breaks out because everyone assumes it was some sort of an attack.  The results are a fragmented United States stripped of its Federal Government (stop cheering!) and hilarity ensues.

I liked the kickoff premise more than the reality.  Birmingham seemed to factor in a lot of real-world stuff in After America.  Dietz focuses on the characters.  The sole survivor of the cabinet (ala Designated Survivor) paddles his way north from Mexico only to be taken prisoner by a New Confederacy that is setting on most the shattered nation’s oil reserves. The military finds itself splinted into a small bands that fight for survival, trying to retake military bases and protect local citizens.

I won’t shatter the overarching plot for you here – please go and read the book.  Suffice it to say, there is a good strong plot, even if parts if it seem a little forced.  My gripe is that the New Confederacy card is one played out in Alternate History and Sci Fi far too often. Yes, it’s a minor thing – but I would have liked something different…personal choice here.

Dietz shines less with story and more with characterization in this book.  While I can sit here and nit-pick it apart, I won’t.  Look, you have to suspend belief here.  This is less a post-apocalyptic survivors book than it is a gritty military fiction book.  This is where Dietz plays well on his home field and provide readers with some very cool battle scenes.

I give this book four out of five stars.  It is the first time I’ve read the author’s work and I find myself compelled to read more – so it must have been pretty decent.