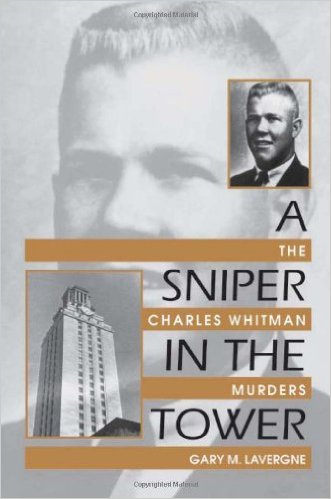 When I was a kid in the 1970s, I saw the TV movie The Deadly Tower, about Charles Joseph Whitman infamous shooting spree in the University of Texas tower.  Kurt Russell played the killer, in an almost cardboard portrayal.  I remember at the end of the film they referenced that in his autopsy, it was determined he had a brain tumor.  That seemed to explain away what he did – shooting 45 people and killing sixteen (including his wife and mother off-campus).  That movie really stuck with me.

Of course that was before all of the other mass shooting incidents that were to follow.  Still, I never forgot that movie.

Amazon popped up a book suggestion for me, A Sniper in the Tower, the Charles Whitman Murders, and I had to pick it up.  (This says a lot that Amazon’s algorithms thought that this would be a good book for me – but that is for another blog post.)  My first thought was that it was a university press book, which meant that this was going to hit the facts.  A lot of university presses are seeing true crime as a context for history, which is great.  One of my own publishers of Secret Witness is the University of Michigan Press.  I like this trend.  It brings a good clinical perspective to a genre that is often tabloid-ish and exploitive.

This book did not disappoint.  Mr. Lavergne had a daunting task ahead of him, one that only a fellow true crime author could appreciate.  How do you tell the stories tied to such a large-scale crime and do so in a way that the narrative is not a hodge-podge of confusion?  I’ll tell you want, he cracked that nut.  This story begins far before August 1, 1966.  Lavergne weaves a story of a pressure cooker slowly building up steam, reaching the inevitable point of explosion.

So much has been written and produced about the shootings I was worried I would be disappointed with the narrative.  I was not.  Where PBS’s recent documentary Tower failed was that it did not weave a cohesive story.  It tried to mirror the confusion and chaos of that day into its telling.  Mr. Lavergne does not fall into that trap.  He stays the course and leads you on the path from the start of Whitman’s spiral into madness to his death and beyond.

The writing style here is crisp and to the point.  There’s not a lot of theorizing.  The facts are what drive this story.  I learned a great deal I didn’t know – which is hard to do with a story that is so often told as this one has done.

I found it interesting in how the author explored the myths and urban legends that surround who actually shot Whitman.  At first I wasn’t sure where he was going, but Lavergne did not disappoint on taking me down this little side-trip through the crime.

A Sniper in the Tower is a great read for true crime enthusiasts.  I have to admit, I’m jealous of Gary Lavergne’s efforts. I always thought this might make a good book, and it has – I just didn’t get the chance to write it.  I think this book will remain the go-to book on this heinous crime for generations to come.  I give it five out of five stars.