I started on this fantastic journey of writing BattleTech stuff, it began with the first technical readout.  I had submitted The Strider Incident to FASA for Star Trek.  They said “yes, but you need to check out BattleDroids!”  I was hooked early on.

Prospective authors were given a bunch of photocopies of the artwork with handwritten notes about the stats.  All of us were given the Rifleman first, as a test.  I must have passed because I was asked to write a whole bunch more stuff.

A proviso to this list, it might be wrong.  There are subtle little things I planted in my stuff over the years that allowed me to figure out what ‘Mechs I did (usually in the armaments I used).  Well, over time, other authors used those too.  As such, I had to do some of this for memory.  Any errors are unintentional.

Note:  We got the ‘Mechs with names and stats.  The rest we just go stats, so we got to name them.  The Chippewa was named after my college mascot.  The Seydlitz was one of my favorite battle cruisers from WWI. There was some pushback on the Stuka, too German WWII related.  In the end, it cleared edit.

The Personal Equipment (Yes, I came up with the grapple rod.)

Note:  I am not sure about the Wyvern…I may have done it.  With this Tech Readout, we got to a mix of design and working with FASA’s stats.

Don’t give me crap about the Hussar.  I know it is universally hated, but I am proud of the design.  It is a ‘Mech version of a Savannah Master.  Fast, toilet paper for armor, annoying weaponry.  Get this behind the enemy and wreck havoc.  That was what it was designed to do.

The Huron Warrior was named for the old Eastern Michigan University mascot, which has since been changed.  The War Dog has remained one of my favorite designs I did from scatch.

Note:  True story.  I got the request to design a few of these ‘Mechs, notably the Grand Titan, while on a business trip.  I remember telling the line editor at FASA I didn’t have my books with me, so I would be designing them from memory.  They were pinched for time and didn’t want to wait two weeks.  “Don’t worry, we will crunch the numbers once we get the write-ups from you.”  Yeah.  That totally didn’t happen with the Grand Titan.  I stopped designing ‘Mechs after the online outrage over my idiocy.  That will change with my upcoming Wolf’s Dragoon novella, where I am tossing caution to the wind. It wasn’t worth dealing with the rabid fan community that had no patience for mistakes…they just wanted blood and FASA’s line at the time was, “The author clearly didn’t’ follow the rules.” 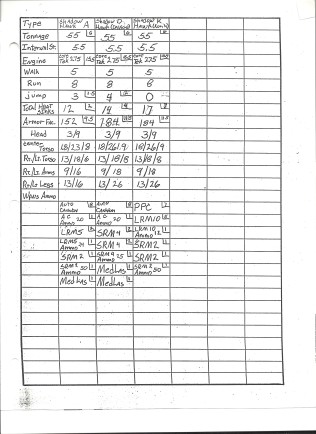 The Shadow Hawk art image and specs.  Unseen my ass!