If you haven’t read my first blog post Part I, on this subject, check it out.

In this final part, we see a massive space battle over Huntress and the arrival of Paul Moon’s Smoke Jaguar relief force, though at this stage of development, no one knew it would be Paul Moon.  As you can see, we didn’t map out the details for the fighting for Huntress, only that it was savage and brutal.  I never agreed with the concept that we would kill every warrior, that seemed unrealistic, and ultimately we did not.

On page 8 you can see my original question mark around Katherine seizing control of the Federated Commonwealth via effective public relations.  Talk about fake news!  Again, BattleTech was ahead of the curve by decades.  I always thought that whole explanation needed a lot more meat behind it.  I find it hard to believe that popularity polls would force a ruler to turn over power.  Then again, when you look at the years when this was written, the power of polls was just starting to emerge.

One thing we never fully covered was who killed Morgan.  Of course, as you saw in Part I, it was supposed to have been Focht that was assassinated. We never really bonded with Morgan as a character enough to care that he had died, at least that is my opinion.  It still remains a mystery as to who killed the Davion Lion.

In the list of units you will see Team Banzai…which was a treat.  I don’t recall us actually using them though.  It was around then that we stopped referecing them in material.

There were a lot of plotlines left open, including Thomas Marik’s fate/identity.  Boy did that get some legs and run over the years!

For me, this was great to dig out and post.  One, it shows you the behind the scenes structuring we went through.  We have been living with the results of this document and the novels that came out of it for decades.  Each author had discretion to interpret the document.  We didn’t have a clean canvas, but it was not a paint-by-numbers print either.

Two, we have been going through a similar exercise for the last year and a half to plan/plot/machinate the next new era of BattleTech.  For old farts like me, it is a real treat to still be doing this after all of this time.  With the Twilight of the Clans we set in motion a series of events that will start to come to closure in the coming few months.  Talk about a long journey!  If I am fortunate, in another 10 years, I will be posting the documents of what we have just completed planning.  Who knows?

In the meantime – here’s a glimpse into the history of BattleTech! 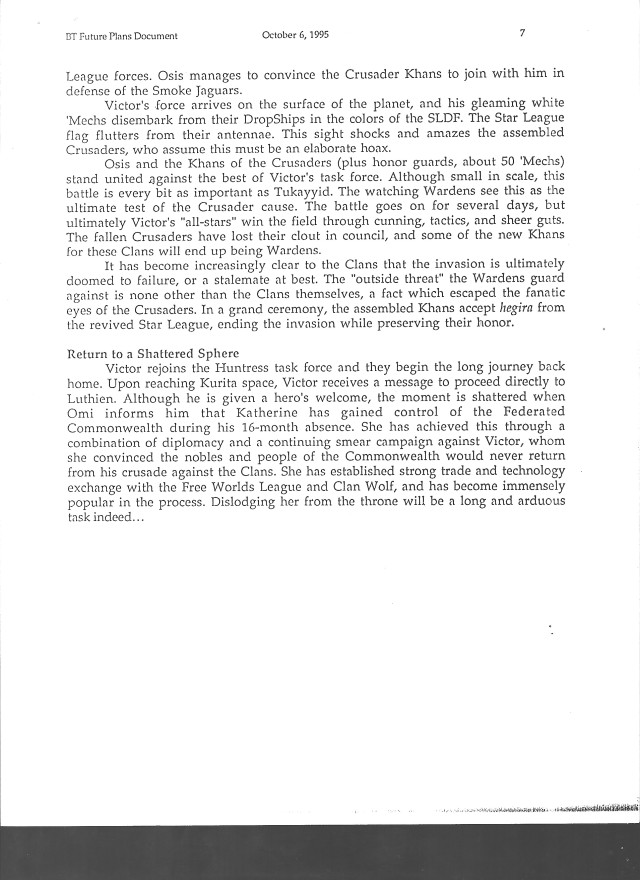