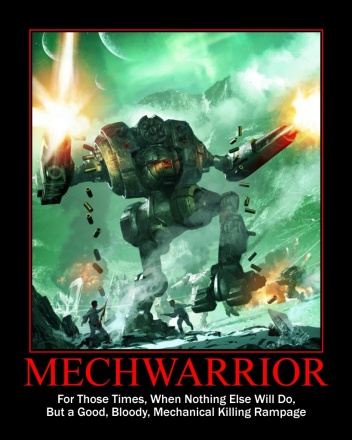 I really started playing MWO about seven months ago.  It all started because of the BattleTech pods at Gen Con.  I LOVE playing in the pods every year – so does my son and my grandson.  I was hoping to recapture some of that experience at home on my PC.

Bear in mind, I’m 56 years old – so I don’t have that energy-drink-fueled set of reflexes that a young kid playing the game does.  I also didn’t do a lot of research into MWO before jumping in – other than it looked like it might be a good way for me to get my BattleTech fix on.

The first few weeks were depressing.  I seemed to be a magnet for long range missile indirect fire.  When I wasn’t being blown apart by LRM’s fired by enemies I couldn’t see, I was having freaking Ravens and Fleas running laps around me, firing at me with pea shooters until my ‘Mech collapsed into a pile of smoking debris.  God I hate Ravens!

Some fellow fans (the 13th Oriente Hussars who I now regularly fight alongside on Friday nights) took me under their wing.  First off, I learned, that the stock ‘Mechs were, “less than freaking effective.”  Customizing a ‘Mech isn’t quite intuitive but I got some help.  Heat is a real issue, but a lot of it was how I configured the target interlock triggers – so I worked on that.  Also, I wasn’t using skills at all.  I was sent by my comrades some great YouTube videos that helped me figure that morass.

I still suck…but not nearly as much.  Moreover, once I got over those hurdles, I found my groove with the game.  Now it is a treat for me.  When I finish writing a chapter or something, I log on and give myself three quick drops.

My callsign is…are you ready…Blaine Lee Pardoe.  Yeah, I know, real creative.  Well it is.  At least once a week I hear somebody threaten me, “Hey man, if the real Blaine Pardoe finds out that you are using his name, he’s going to be pissed.”  Efforts to explain to them the truth often fall on deaf ears.  “Yeah – right, you’re really HIM.”  Also, it can be stupid to have that callsign, because a few folks have killed me and really enjoyed that.  “I killed the guy that wrote some of this stuff!”  “Laugh it up pretty boy – I’m switching to my Atlas Kraken for the next drop.”

I am now using it for research…at least that is my excuse with my wife.  I have picked up some wonderful slang for BattleMech names and such which I am incorporating into my fiction.  Funny how that works isn’t it?
So if you see me online – yes it is me.  Yes it is cool to ask me questions.  No it is not cool to shoot me in the back.  It is most cool if you see a Raven heading my way to kill it.

9 thoughts on “Yes, I Do Play MechWarrior Online”