Next week I retire (early – I can’t stress that enough) from working for the Corporate Overlords and dedicate my time to being a full-time author of true crime and science fiction. As such, I need to expend a lot of excess humor that has been building up for some time.

These are things I’m banned from doing, or have learned I shouldn’t do, or things I shouldn’t say aloud.  Some I’ve done – some I’ve only contemplated, others I’ve witnessed and thought, “I’d better not try that shit.”

Fair warning, there may be duplicates.  After around number 400 or so they start to blur together.  Some are inside jokes…I make no apologies.  Most are generic enough for everyone to enjoy, especially IT folks.

Feel free to share with anyone you think needs a laugh.  After ten years, the list has grown pretty long, so there is enough there to tide you over for some time.  Enjoy!

8a.  Using the middle finder to tell someone that they are number one while on camera is considered inappropriate.

107a.    I will stop referring to the Secaucus office as ‘the swamps of NJ’ even though it is in a Bruce Springsteen song. 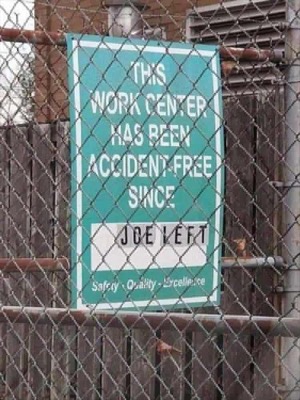 Like this, you’ll enjoy my snarky book Business Rules